Hear The Story of Sojourner Truth

Hear The Story of Sojourner Truth 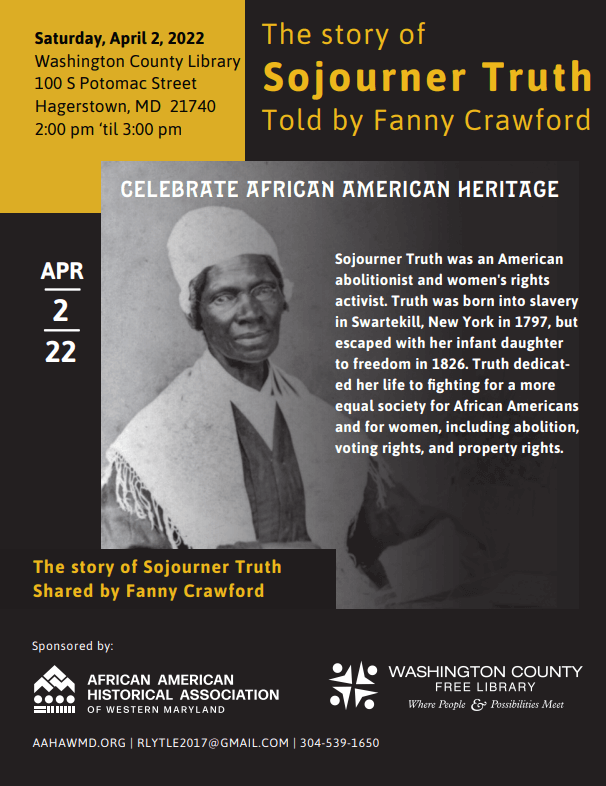 Join us on Saturday, April 2, 2022 at the Washington County Free Library to hear Mrs. Fanny Crawford share the story of Sojourner Truth.

Sojourner Truth was an American abolitionist and women’s rights activist. Truth was born into slavery as Isabella Baumfree in Swartekill, New York in 1797, but escaped with her infant daughter to freedom in 1826. After going to court to recover her son in 1828, she became the first black woman to win such a case against a white man.

She gave herself the name Sojourner Truth in 1843 after she became convinced that God had called her to leave the city and go into the countryside “testifying the hope that was in her.” Her best-known speech was delivered extemporaneously, in 1851, at the Ohio Women’s Rights Convention in Akron, Ohio. The speech became widely known during the Civil War by the title “Ain’t I a Woman?”, a variation of the original speech re-written by someone else using a stereotypical Southern dialect, whereas Sojourner Truth was from New York and grew up speaking Dutch as her first language. During the Civil War, Truth helped recruit black troops for the Union Army; after the war, she tried unsuccessfully to secure land grants from the federal government for formerly enslaved people (summarized as the promise of “forty acres and a mule”). She continued to fight on behalf of women and African Americans until her death. As her biographer, Nell Irvin Painter wrote, “At a time when most Americans thought of slaves as male and women as white, Truth embodied a fact that still bears repeating: Among the blacks are women; among the women, there are blacks.”